At the heart of the COVID-19 crisis sits the Canadian Mortgage and Housing Corp. and its low-income borrowers 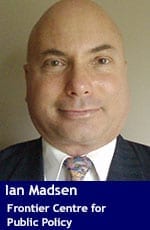 The shutdowns ordered by Canadian governments to slow the spread of COVID-19 have caused unemployment to leap. And put mortgages in peril.

Many of the millions of workers laid off have been low-income and lower-middle-income earners. They’re just the sort of people who qualify for home mortgages insured by the federal Canada Mortgage and Housing Corp. (CMHC).

As potential home buyers, these Canadians had too little savings for a normal down payment, too low an income, or too short or erratic an income or credit history to qualify for uninsured bank borrowing.

In a valuation study by the Frontier Centre a couple of years ago, a sensitivity analysis was conducted to see what the effect would be of an increase in unemployment on mortgages insured by CMHC, which is a Crown corporation.

Retail clerks, hairstylists, waitresses, hotel housekeeping staff and flight attendants might not, on their own, have even the reduced down payment to purchase a small home. But they’re often part of a household whose members, combined, might qualify.

Now, having been laid off, they no longer qualify. Or, if they have already received a mortgage thanks to CMHC, they may not be able make their mortgage payments on a reduced income.

In addition, other unskilled, lower-paid workers, such as non-trades construction workers and factory workers, may soon be unemployed as lower demand and lower sales multiplier effects ripple through the economy.

FROM THE ARCHIVES: CMHC nudging more aggressively into housing market by Ian Madsen

Plus, all the energy-related workers – and those dependent on their spending – who have lost their jobs in Alberta, Saskatchewan and elsewhere in the country find themselves in the same predicament.

The valuation study concluded that, as a cash-generating business, CMHC’s intrinsic value ranges from $7.47 billion to $29.9 billion, with a median (mid-point of the array of calculated values) of $12 billion and a mean (simple average) of $13.6 billion.

However, a severe recession, such as is now devastating workers in this country, could bring about 13 per cent unemployment.

That would lead to mortgage default rates as high as 50 per cent in the Greater Vancouver and Greater Toronto regions, where home prices were over-inflated and unaffordable to most people. In other parts of the country, default rates could be in the range of 10 per cent.

In such a scenario, the CMHC value range drops to somewhere between $6.2 billion in the red to $16.2 billion to the good, with both the median and mean in negative territory.

That would mean insolvency on the horizon for CMHC.

So a severe recession such as the one we’ve entered will be substantially harmful for CMHC.

If income replacement programs enacted by the federal government are insufficient to help homeowners with CMHC-insured mortgage payments, the Crown corporation could require a financial injection in the realm of several billions of dollars.

That would ultimately be paid for by Canadian taxpayers, if not immediately, then in the future. This will drag on the economy, perhaps for a decade or more, just as the austerity measures of the 1990s did well into this century.

It’s unclear what the delinquency rate will turn out to be for CMHC’s mortgage portfolio. It may end up being significant but not solvency-threatening.

Plenty of study, including a post-mortem after this downturn have receded, will be required for CMHC to determine how best to avoid such crises in the future. Will it need to change its standards and requirements in order to lower its risks in future recessions, whether caused by pandemics or anything else?

It’s already too late for this economic debacle. Taxpayers will be on the hook for its effects.

And overextended home buyers will lose their dwellings, adding an extra measure of misery to that brought on by their unemployment.